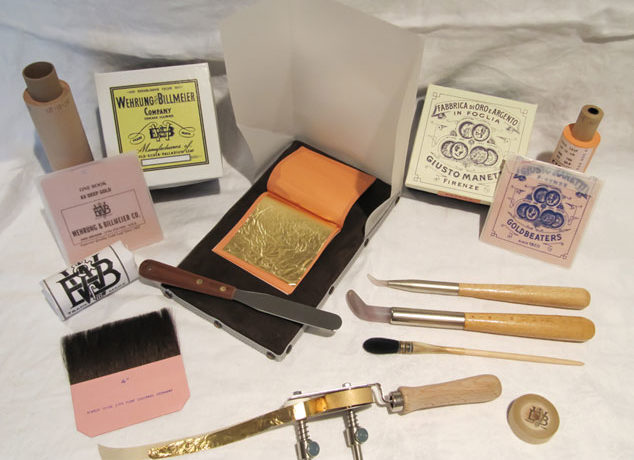 The term gilding covers a number of decorative techniques for applying fine gold leaf or powder to solid surfaces such as wood, stone, or metal to give a thin coating of gold. A gilded object is also described as “gilt”. Where metal is gilded, it was traditionally silver in the West, to make silver-gilt (or vermeil) objects, but gilt-bronze is commonly used in China, and also called ormolu if it is Western. Methods of gilding include hand application and glueing, chemical gilding, and electroplating, the last also called gold plating. Parcel-gilt (partial gilt) objects are only gilded over part of their surfaces. This may mean that all of the inside, and none of the outside, of a chalice or similar vessel is gilded, or that patterns or images are made up by using a combination of gilt and un-gilt areas.

A gilded Tibetan Vajrasattva: Herodotus mentions that the Egyptians gilded wood and metals, and many such objects have been excavated. Certain Ancient Greek statues of great prestige were chryselephantine, i.e., made of gold (for the clothing) and ivory (for the flesh); these however, were constructed with sheets of gold over a timber framework, not gilded. Extensive ornamental gilding was also used in the ceiling coffers of the Propylaea.

Pliny the Elder informs us that the first gilding seen at Rome was after the destruction of Carthage, under the censorship of Lucius Mummius, when the Romans began to gild the ceilings of their temples and palaces, the Capitol being the first place on which this process was used. But he adds that luxury advanced on them so rapidly that in very little time you might see all, even private and poor people, gild the walls, vaults, and other parts of their dwellings.

Owing to the comparative thickness of the gold leaf used in ancient gilding, the traces of it that remain are remarkably brilliant and solid. Fire-gilding of metal goes back at least to the 4th century BC, and was known to Pliny (33,20,64–5), Vitruvius (8,8,4) and in the Early Mediaeval period to Theophilus (De Diversis Artibus Book III).

In Europe, silver-gilt has always been more common than gilt-bronze, but in China the opposite has been the case. The ancient Chinese also developed the gilding of porcelain, which was later taken up by the French and other European potters.

Where to buy edible gold leaf

Where to buy gold leaf