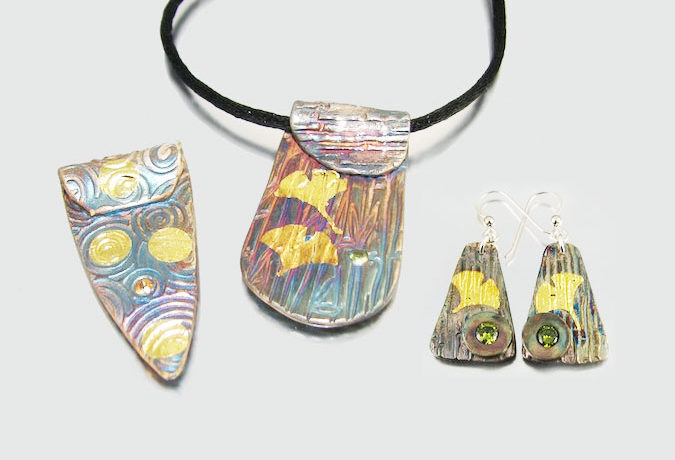 Kum-Boo (also spelled keum-boo or kum-bu) is a Korean decorative appliqué technique in which pure gold foil is fused onto the surface of finished silver objects; similar techniques are also widely used in Japanese and Chinese metalwork. In the West, the method has more often been employed to fuse gold to iron, steel or copper. This technique can also serve to adhere 24k gold to gold, other standard colored-gold alloys, palladium, white gold and platinum.

The origin and historical development of the kum-boo technique are little known, but it is clear that Koreans have been using brass, silver, and gold ware and utensils for their daily eating and ceremonial purposes for thousands of years. Things changed after the end of the Korean War in 1953; since that time most brass and silver utensils have been replaced by aluminum and stainless steel wares for common use. Only in the late 1970’s was interest in traditional customs revived, including a revival of the use of finer metals, particularly for ceremonial occasions such as birthdays, weddings, and ancestral memorial services.

Metal utensils and tableware, especially those made of silver and gold, have practical as well as aesthetic functions. For example, brass and silver utensils are commonly used to keep food at the correct temperature, especially in the winter. Among the wealthy upper classes, silver tableware displays status, but it also serves the more practical purpose of testing food for spoilage or poison—a precaution used in the royal families for centuries.

Koreans and other East Asian peoples traditionally believed that the ingestion of pure gold would improve health and well-being. For this reason, many Korean silver utensils are decorated with 24-karat gold overlays in the form of letters and patterns that convey wishes for good health, wealth and longevity. In most cases, the ornament is set in the interior of a cup or bowl or within the bowl of a spoon, so that the food will be in contact with the gold and therefore able to assimilate its positive characteristics before being imbibed. For the same reason, many herbal medicines are covered in gold foil, and acupuncture needles are often made of a high-karat gold in the belief that the properties of this metal will enhance the efficacy of the treatment. Source: Jennifer Michael